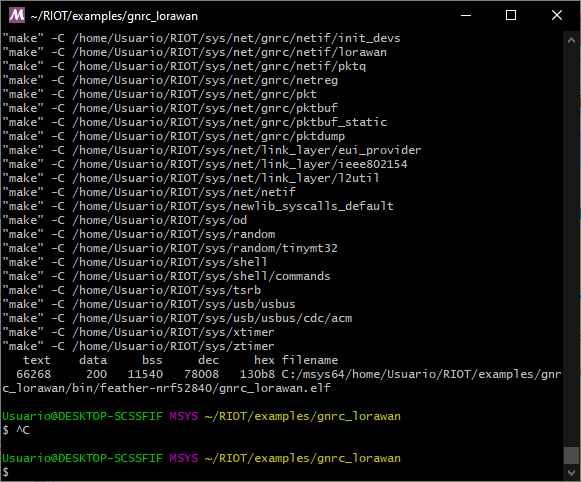 Can you help wich files must i config to choose wich NRF52840 GPIO to access CLK,MISO,MOSI, CS and RST ?

Hi and welcome! I’m a bit confused by which board you are using. The Feather nRF52840 Express does not come with a LoRa module and neither does the Feather M4.

Did you connect the LoRa module yourself? Or are you using the Feather M0 with RFM95 LoRa Radio? 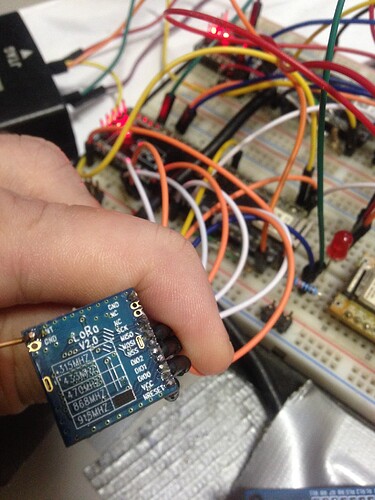 See if you can help me!

For the GPIOs you can use any pin, just make sure to tell the sx127x driver which is which. You can find the defaults in sx127x_params.h, you can overwrite them in your board.h.

For SPI, you’ll need to configure the SPI device in your board’s periph_conf.h. Then make sure to add USEMODULE += sx1276 to your Makefile to select the right driver.

Benjamin Valentin Looks that is running on NRF52840 (UBLOX-NINA-B302) 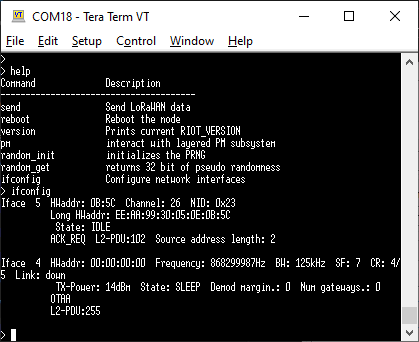 Is there some option to 915AU

Ideally, we’d have a database with channel / settings combinations for different regions, but this has not been implemented yet.

yes, i see that

I am waiting in other group a update to AU915. We are discussing!

Hey. I hope you have managed to make LoRa work, as discussed here.

If you have another device that can do LoRa/LoRaWAN, you should be able to listen to packets now.

Just curious, what’s your use case? Do you plan to use a LoRaWAN infrastructure (e.g TTN, where nodes send frames to a centralized Network Server via gateways) or you simply want to send frames between LoRa nodes?

For the latter you don’t need the LoRaWAN stack. You could simply use tests/driver_sx127x to send frames. You could already use the AU915 bands there.

Hello, I want to use to LoRaWAN. The LoraWAN RIOT example still not ported to 915AU

Hey. You can use Semtech_LoRaWAN package for the time being. An example is available in examples/lorawan. Use this branch , change the board name in makefile to the one you configured and use

command while inside the example folder to configure the channel plan as well as other parameters.

looks that only EU868 is in the config

as suggested by @akshaim, you can use in the meantime the Semtech pkg. This should work:

You can also try test application for the Semtech pkg:

Let me know if this work for you

Hello big Team LORA_REGION=AU915 BOARD=<your_board> make -C -C tests/pkg_semtech-loramac flash example looks much better! No crash on NRF52840 + SX1276 I cant now to continue the test because here there is not LoRaWAN coverage! Thanks so much!

No success using the LIB no join did you get success in your side ?

i tried with my local gateway Dragino too…no JOIN

Coincidentally, I’ve also been working on experimenting with RIOT on a lorawan node this week, in combination with a dragino Pi hat as a lorawan gateway.

I too am having difficulties getting a successful join. I noticed that my Join Request is being received by both the gateway and the TTN network console. I’m also seeing a Join Accept being sent out by TTN (in the console), and on the device-console it marks it as “seen”. But still the join fails…

My current hypothesis is that the join accept is never received by the Gateway, so it cannot send it to the node. This might be because my firewall is blocking incoming UDP traffic from TTN.

I’m not sure if your issue is the same as mine, but you might want to try opening up UDP port 1700 on your router.

I dont belive that is a firewall problem there, because i got success with LoRaWAN SX1276 join using ARDUINO, MICROPYTHON and CIRCUITPYTHON )

Wich is your sequence of LORAMAC commands that you use ?

I’m not using 915AU, but I don’t think that should make a difference.

I’m using the lorawan example out of the box, on the esp32-heltech-lorawan board.

If you can receive the joins on your other devices, then it can’t be a firewall problem indeed (unless those connect through other gateways than your own ofcourse)