Maybe someone can help me. I have the task to implement RIOT on this MC: AVR-based Sensor Node with Xbee (ASN(x)) → https://github.com/DoWiD-wsn/avr-based_sensor_node.

Its an ATmega1284p MCU with a different PCB (findable in git under /docs/pcb_design.md)

I am currently doing the steps from (doc.riot-os) porting-boards.html and trying to do the board definitions.

I know I can integrate the header files in a own folder and have to edit the Makefile.include: INCLUDES += -I<some>/<directory>/<path>. But where can I place the source files from https://github.com/DoWiD-wsn/avr-based_sensor_node/tree/master/source/asnx_lib ? (for example: the uart file which is placed in /uart/uart.c)

Can you also give me a few tips to run RIOT on this avr-based_sensor_node in general?

I would appreciate your support!

First make the new port work (to compile and to run single tasks inside a minimal system). Start with a known and similar port, like the one for the ATMEGA328 (core is identical among Atmel devices). Once you’ve done it, then move on into the BSP.

I guess a better starting point would be boards/mega-xplained or just the plain boards/atmega1284p board.

The CPU is already supported by RIOT, you only have to provide a board definition.

You can start by copying one of the existing boards and make adjustments to match your hardware.

Thank you for your input.

What I did in the meantime: (I): I have created a new board by copy the folder /RIOT/boards/atmega1284p to a new folder named /RIOT/boards/myboard2021_2

(II): I have also created a new module with “make generate-module” (which creates a new module in RIOT/sys/) named “myboard2021_hw” and “led”, and have copied the 2 *.c files from https://github.com/DoWiD-wsn/avr-based_sensor_node/tree/master/source/asnx_lib/hw into it.

(IV): I have created a application file/directory with this main.c: 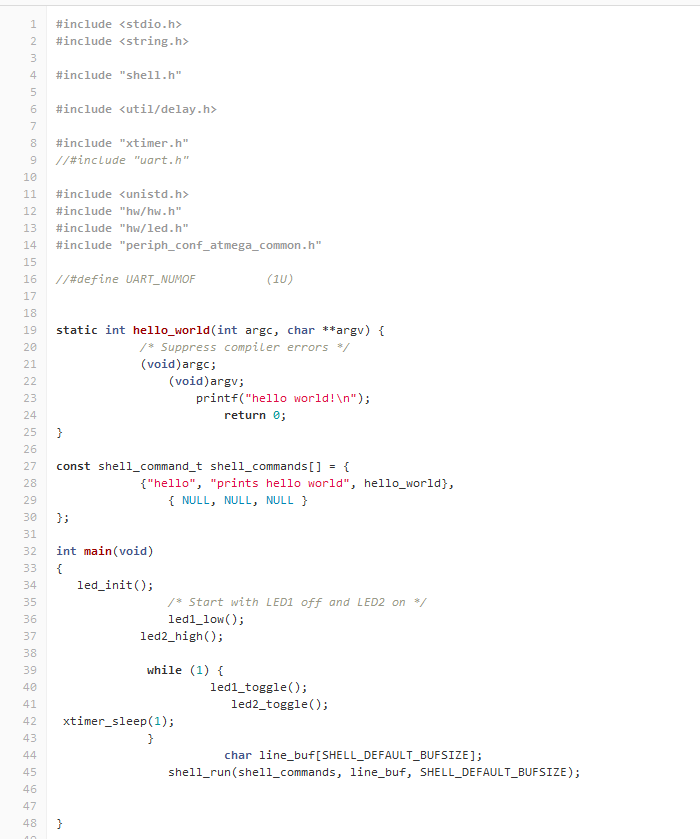 and this applciation Makefile: 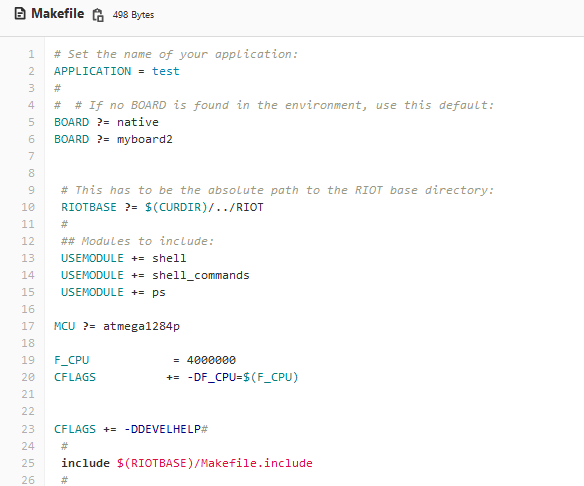 and flashed it with:

But UART is still not working

but the output is always:

No output and input via UART possible. Do you know how to change the UART dev from “UART 0” to “UART 1”?

I tried also to include the UART files from https://github.com/DoWiD-wsn/avr-based_sensor_node/tree/master/source/asnx_lib/uart to a new module like discribed in (II) but it did not work. → and I also think that RIOT has a own uart and printf function!?

Do you have any idea how to run UART on UART1 on atmega1284p?

did you try some other example like examples/hello-world or examples/default?

Mind you that in the code you posted you have the LED blinking in an infinite loop, so the code that will start the shell is never reached.

RIOT has it’s own HAL (see cpu/atmega_common/periph) so you don’t need to pull in any third party files for UART support.

I also removed the loop in my code, still the same issue → UART does not work

With the native board it works:

It seems like the UART config isnt correct in my case. I will double check it. Do you have any idea why it doesnt work?

just for info: uart1 is using register/port UCSR1A on my board

No output and input via UART possible. Do you know how to change the UART dev from “UART 0” to “UART 1”?

Ah sorry, I did not read that. You can do so with

I have to start the serial connection first with /dev/ttyUSB0 (terminal 2 (terminal on the right side)) and after that I flashed the “hello world” main.c with “sudo BOARD=myboard2021_2 AVRDUDE_PROGRAMMER=stk500v2 PORT=/dev/ttyACM0 make all flash”

Thank you very much for your help so far!

I will try now to implement the sensors like in: https://github.com/DoWiD-wsn/avr-based_sensor_node/tree/master/source/002-sensor_demo

on the left side of the screenshot you can see the “native” Uart communication, and on the right side “myboard” UART:

“hello” and “board_say_thanks” commands on the command line in UART do not work. Seems like a missing config for UART write communication. any ideas?

Looks like you aren’t getting any RX interrupt. Can you post you board configuration? Your RIOT version seems a bit old, maybe check with the latest master first.

btw: You probably noticed that a some of those sensors already have drivers in RIOT so you can just e.g. USEMODULE += lm75a to add the driver to your application.

funny thing! I dont know why, but it works now.

@regarding the RIOT drivers, thanks for the tip. I will try that in the next step.